When I decided to adopt our farm animals I had only owned dogs, cats, rabbits, a bird…how hard could goats and minis be to take care of? I had volunteered for close to two years at the sanctuary taking care of them, I can do this! And I can and do, but boy  have I learned a lot. 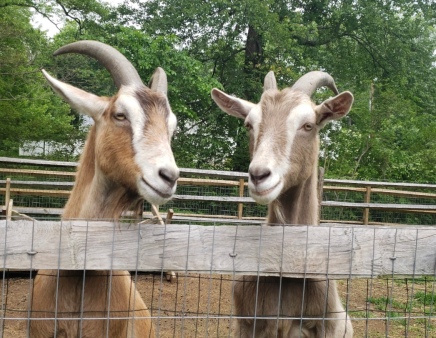 I am very fortunate to have a very understanding and extremely sweet veterinarian. The goats have been relatively easy, only a few issues, but Dominic has proven to be my high maintenance guy. He is very cautious as donkeys are; but he tends to be even more so as he was attacked by a bear. The first time I was that crazy first time donkey owner I discovered a huge swelling on his stomach, when I called the vet on a Friday evening at 5  o’clock they told me she was out of the country…double panic mode! They gave me the number for the on call vet at another practice, I called first thing Saturday morning and to my pleasant surprise it was his vet that his previous owners used, Dr. Hays. When the receptionist asked his name she said “THE Dominic the donkey from Chester?!” I said yes indeed. Dr. Hays was so thrilled to see him and even had pictures of him on her phone. Luckily it turned out to be an infected bug bite. He was treated but they decided to do blood work just to be safe, turned out he has Cushings disease. Wha?!

Tell me this wouldn’t freak you out?!

Cushings disease is a condition in which the pituitary gland releases too much adrenocorticotropic hormone (ACTH). ACTH stimulates production and release of cortisol, a stress hormone. I was upset and concerned but the Dr. assured me that he will live a long, happy life with the help of little pink pill to control it. She said that at his age it is quite common. (He is 19). Basically Cushings makes the body believe it is stressed out which can lead to lowered immune response, problems metabolizing food and regulating blood pressure. Humans and other animals also can be afflicted by Cushings.

Back to the vet…like I said she was so thrilled to see him again and treat him that I asked if she would like to be his regular vet again along with the mini horses. She very happily said yes. She was worried about what their regular vet would say, but I assured her that Dr. Marybeth would be totally fine and understand. Of course Dr. Marybeth understood and is still our vet for the goats as well as the back up for the minis.

Little pink pill, no problem. Little pink pill, big problem! This is when you realize just how smart your mini donkey really is. At first I put it in apples and carrots until he figured it out, he refused to eat them. My vet suggested a soft horse treat that I could smush the pill into, that worked for about 2 weeks. I tried apple sauce, homemade treats; no go. He would spit them out or clench his mouth shut. I tried sweet grain, he would eat the grain and leave the pill! What to do?!

Now, every morning when he greets me at the door of his stall and I take the pill and put into the back of his mouth under his tongue. To keep him from spitting it out, I rub his face for a minute keeping his mouth closed while he rests his head on me. And even then he still spits it out once in a while.  He stopped eating carrots, apples and treats thinking there’s a pill hidden in them but now after more than a year there is one kind of treat he will eat again but…he takes it his in mouth and breaks into pieces before eating it, just in case there’s a little pink pill hidden in there.

Resting his head on me waiting for the pill to dissolve.

Due to the Cushings he gets little sores on his legs, his skin is very sensitive. This past summer he never completely shed. This past fall his winter coat didn’t grow in, so one cold morning when I went to let them out he was shivering; now he wears a blanket. He does look very handsome in it. Turns out though when it got really cold, below freezing, he was still shivering; the vet suggested giving him a small amount of grain in the morning and evening to get his metabolism revved up. Thankfully it worked, along with a heavier blanket. I worry about him a lot but wouldn’t have it any other way, he is my heart!

The moral of the story; no matter how much research you do or what you think you know, there is always more to know and having a great vet that loves your animals as much as you do is super important!