Getting ready for the big day was a lot of work and expensive…think long and hard before you decide to bring home any type of farm animal. Luckily I knew what I was getting into, volunteering at The Barnyard Sanctuary prepared me for the work involved and the expenses.

First I had to order a shed and luckily my husband is super handy and built the beautiful base. Next came the fencing, it must be goat proof or they’ll be running through your neighborhood!

I read everything I possibly could about raising goats to prepare for their arrival. My first trip to Tractor Supply was almost better than going shopping at my favorite mall. I bought all the essentials: thermometer, water buckets, hoof trimmers, minerals and of course treats!

The day we went to bring them home was one of the best days of my life. I was so excited and happy and not one bit nervous. 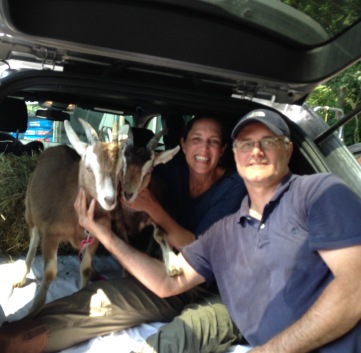 We brought them home in the back of our Jeep. We put down plastic and sheet and I sat with them. At one point on the ride home Cola tried to jump into the front seat with my husband! 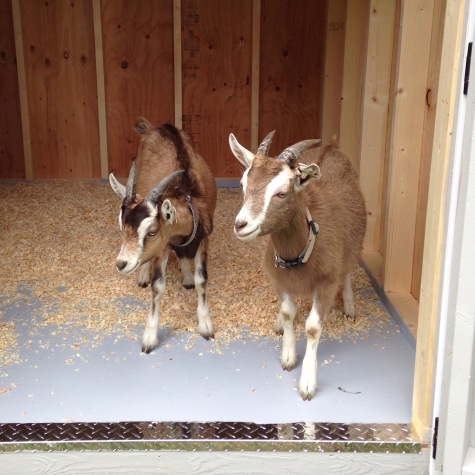 We got them home and into their pen with no problems. They settled in nicely and were so curious about everything! My sweet sister Barbara was the first to meet them and brought them a welcome gift of carrots which they loved. 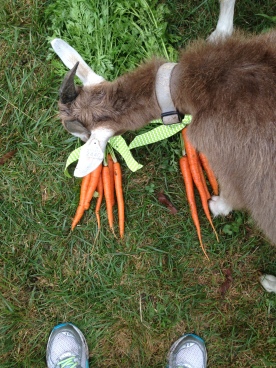 They cried when we left the pen and it broke my heart but I knew I couldn’t stay in there all day and night, it was like crate training a puppy. They would stop after a few minutes.  For about a week or so they would cry when we left the pen until they realized we would always be coming back. Our lives have changed forever since they have joined our family, for the better.

Now you ask what is a “cull” boy? The dairy industry is a cruel world. Females are impregnated again and again because without having babies they will not produce milk. So once the babies are born they are taken away from their mothers. The females are bottle fed only to grow up to lead the same sad life as their mothers. The male babies are taken away from their mothers, all put together and within a day or so after being born are shipped off to slaughter. Yes, to slaughter. This is true for cows, sheep and goats.

Now back to the good part. A fellow sanctuary worker had posted on Facebook a video and some photos of the new babies and I could not wait to meet them! So that Saturday when I got there I went right to their pen and it happened. All ten of them came running to the gate when they heard the chains and the first two around the corner were light colored while all the rest were dark brown. They came right to me and hung out with me while I cleaned their pen while the others went on to do their own thing. 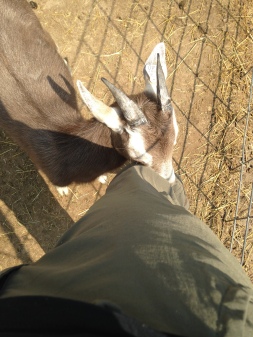 Week after week I would come on my usual Saturdays and there would be less of the babies until one Saturday when Tamala, the sanctuary owner told me that Pepsi and Cola (I named them that first day I saw them) were off to their forever home later that week. PANIC and HEARTBREAK! There were two others still there, why couldn’t they take them? I did it. I told her I would take them. I could not let them go. 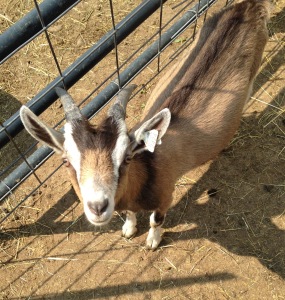 Cola with his icky ear tag, saying the same thing as his brother, don’t go Mom…

I was terrified of what my husband would say but I just knew they were mine. Tamala said of course and that the other family would be happy to have the other two. 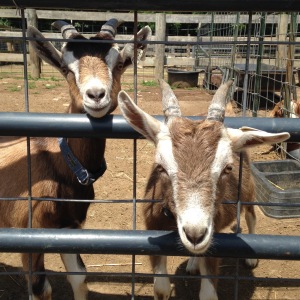 Hard to leave those faces but knowing they were coming home with me soon made it easier.

I bought them collars with their names…of course!

My husband wasn’t thrilled at first, we had just started an addition on our house and the where, how, when, etc…but a few weeks later we brought them home.